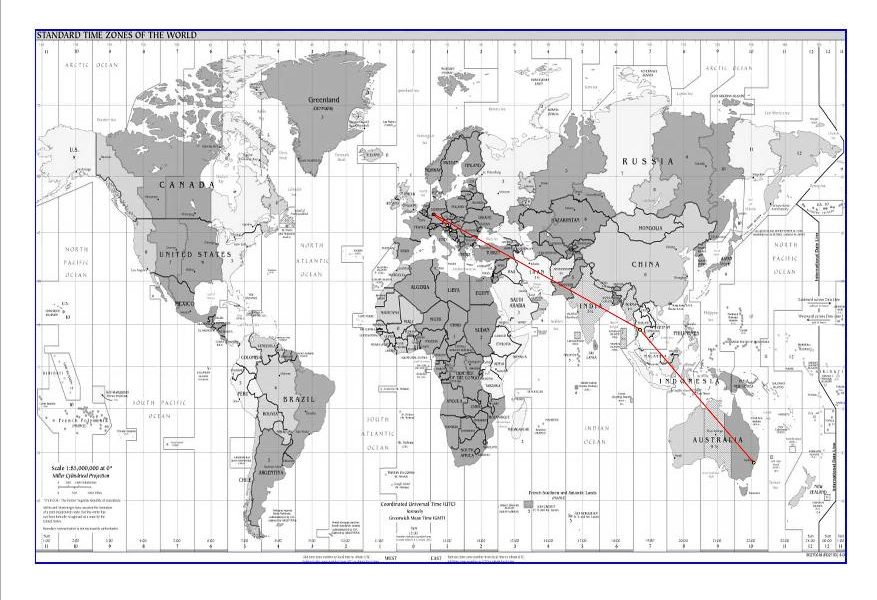 So for a change this time GM Perry drops me at the Graz Hauptbahnhof or main train station where I am grabbing a train from Graz to Zagreb—crossing Slovenia. It is around 4 hours and time to work on the laptop. We stop in Dobova where about 15 border police in 3 groups go through the carriages, I imagine this the border crossing, the first group look at and stamp my passport, the second group ignore me and the third group stamp my passport again, not sure if I entered Slovenia and departed on go or they just were stamp happy.

Anyway I arrive into a dark and wet Zagreb just before Midnight to be met my Vlado, Martina and a couple of the local students. Vlado, Martina and I head into the city for a late night coffee to catch up before the activities get underway. The next evening the local students put on a Birthday party that included copies amounts of local food, is there any other kind, as well as singing and a card with chocolates. It is interesting to see how the locals celebrate birthdays.

The next day it is time to hit the mats with some testing and signature work with the local students before the weekend’s seminars.

World Tour 2015, Crotia: just 1 of the 5 training areas in the Combat Centar.

Another of the 5 training areas in the Combat Centar.

To add to my local sightseeing on Friday we head into the hills, well on the snow-capped mountain that overlooks Zagreb, well known for skiing and we meet up with some of the local students who are indeed enjoying the slopes for a traditional lunch on the mountain. I in general try to stay out of trip photos apart from the on the mats but just to prove I climbed up and froze a little on the snow covered peak I made an appearance.

Saturday and the seminar was underway, topics on the mats included: Circles, Arm Bars, Hand Attacks, and Bag Fu for the first time. The day goes well with everyone getting involved and everyone enjoys the pain on the mats. Sunday is a bigger day with 9 hours on the mats, more hands on with S Locks, Arm Bar under, Turbo Topics and for a treat the Dan Bong. After the day group there was another seminar for Security/Military/Police and Bodyguards. A retired Army General dropped in and joined the fun and was very impressed with the ease of the techniques.

The plan for the week after the seminar weekend is to have the days for planning the future for the IHA here, as well as some sightseeing around the region. Once Valdo heard I visited 39 countries a plan was put in motion to tick off number 40. So we hit the road north towards Slovenia which is only just over an hour away, on the way we stop to visit a quite impressive castle, the Trakoscan Castle.

A castle has to have weapons.

So the weather is excellent and after taking a look at the castle we head towards country #40 and Slovenia, now this is where the fun starts, unbeknownst to either Martina or I, Vlado likes to run the fuel pretty empty before filling up… So we head to the border which is a small back road entry where when Vlado asks for a stamp for my passport we are told we can’t enter the country and have to use the main entrance on the highway, this one can’t handle foreigners like an Aussie. So we do a turn and as we drive away from the entrance up the hill, Valdo exclaims we may have fuel issues literally moments before the car’s engine stops..

The dread border on a hill.

When we left our intrepid heroes they were experiencing fuel issues on the Slovenia/Croatia border, now lets see what happens. Vlado feverishly pumps the peddle as he tries to restart the car, and at the same time we hit the crest of the hill, the car kicks back into life. The thought is the angle of the hill made what little fuel is left run to the back of the tank, so we cruise down the hill back to the Croatian border guard who tells us fuel is ‘only’ 8 kilometres away. So the drive safe and save fuel kicks in as we head for the nearest town with a petrol station. We make the town to find out that there is no petrol station and that the closest one is ‘only’7 kilometres away. About now you can forget doing a rain dance, there were 3 of us doing a fuel dance. The Diesel Toyota surprises us all as it chugs away and gets us on fumes to the next town, phew.

Fuel for the car and relief for the soul.

We get back onto the highway and cross into Slovenia with no problems this time, and I chalk up visiting country #40. A brief drive later we are in Ptuj where we grab a decent coffee with some of the local Kickboxing instructors. They were at the weekend seminar and are possibly interested in adding Hapkido to their school in the future. After a catch up it is time for another Meat Platter, I mean meal before we head back to Zagreb to catch the evening class.

It is a long drive back, but after visiting the park well worth it. My last couple of mat sessions are a chance to fix some small issues and then to complete the grading the local students have been undergoing with the news of who passed and who needed more work. I am happy to say that more than half the students passed and that overall the technical level here in Croatia is off to a good start under Vlado’s guidance.

Congratulations to the first IHA certified coloured belts in Croatia.

Of course I can’t complete my visit to Croatia without addressing the CGN Fabian challenge, and maybe even adding a pain face. Thank you to Vlado and Martina and the crew for making this an enjoyable stop with a combination of training, meat fests and sightseeing. Plans are already underway to have some of Team Croatia joining us at the ITS Australia in 2017, of course I will be back here in 2016 to keep the good work going.

A nice note as I checked out of my hotel, the front desk gave me a present of some local salt/pepper crackers and a bottle of homemade orange liqueur, just to thank me for the longer stay and putting up with some noise. Apparently some Korean guests were very loud, I can’t say I noticed them, still it was nice of the hotel.

Crackers and Booze from the hotel.

A sign on the plane, its German for Exit, but with 50 Aussies on a ITS flight it will be an AUSGANG.

Back into the friendly skies with 2 more flights, as I am on Austrian first I am connecting through their main city Vienna on my way to grab a Polish Air flight into Warsaw.